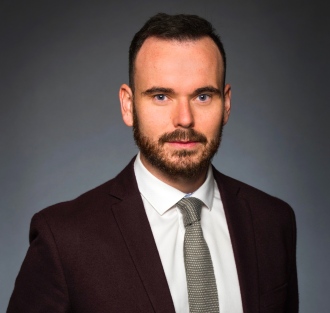 Dr. Kyle Kirkup is an Associate Professor at the University of Ottawa Faculty of Law (Common Law Section). His research explores the role of constitutional law, criminal law, and family law in regulating contemporary norms of gender identity and sexuality.

Kyle’s work has appeared in the University of Toronto Law Journal, the Canadian Journal of Law and Society, the Ottawa Law Review, the Supreme Court Law Review, the Osgoode Hall Law Journal, the Windsor Review of Legal and Social Issues, the Canadian Journal of Education, and the Journal of Race, Gender and Ethnicity. He is currently working on a book length manuscript, under contract with UBC Press, titled Law and Order Queers: Respectability, Victimhood, and the Carceral State.

In 2010-2011, Kyle served as a law clerk to the Honourable Madam Justice Louise Charron at the Supreme Court of Canada. He also taught advanced constitutional law in the Faculty of Law at Western University and worked at McCarthy Tétrault LLP in Toronto. He was called to the Bar of Ontario in 2010.

Kyle is a frequent media contributor, most recently publishing editorials in The Globe and Mail, the National Post, Policy Options, and TVO on topics including same-sex marriage, solitary confinement, the Court Challenges Program, judicial complaints, sex work, and HIV non-disclosure. He has also been interviewed by media outlets including the CBC, The Globe and Mail, Le Devoir, Global News, the Toronto Star, the National Post, TVO’s The Agenda, BBC Canada, CTV Your Morning, The McGill Law Journal Podcast, and Torontoist about his research.

Kyle has appeared before the House of Commons Standing Committee on Justice and Human Rights as an expert witness on the criminalization of HIV non-disclosure and sex work. He has appeared before the Standing Senate Committee on Human Rights as an expert witness on human rights in Canada’s federal prisons. He has written expert reports on LGBTQ human rights issues in policing and corrections settings for the Office of the Correctional Investigator and the Ontario Human Rights Commission. He also served as the principal investigator and author of Best Practices in Policing and LGBTQ Communities in Ontario. He previously served as a member of the Egale Canada Legal Issues Committee, along with the Board of Directors of MAX: Ottawa’s Health Connection for Guys into Guys.